Dishes
125 руб
400 руб/за 100 гр.
помидоры, огурцы, перец цицаки, маслины, сыр Фета, оливковое масло
300 руб
280 руб
креветки, сухари, сыр, помидоры, соус "Цезарь"
300 руб
Go to menu
Cafe history
In 1995, Mr. Afanasov put a foundation in the premises of the Cafè "У Сережи" of the church of St. George and in the year with a help and offerings of his visitors the doors of this beautiful church were open for the public.
The Cafè has a guest "Memory Wall" which is located in the main faye where every visitor could leave a part of his own tie as a sign of a gratitude. This tradition became especially loved since this personal touch leaves one with a feeling of undeniable part of the experience in such an expressive way.
It was visited by many celebrities and activists of Russian culture. The Cafè hosted quite a few receptions of international level among these was the town twinning of Essentuki and Greek metropolitan Argyroupoli.
In 1992, this Cafè was found as a small establishment by a young ambitious businessman Afanasov Sergei Fotievitch. Right from the start the Cafè became one of the favorites of the locals and guests of Caucus Mineralnye Vody region.
Cafè " У Сережи" is a real pearl in the cascade of cafès and restaurants of the Caucus Mineralnye Vody region. This Cafè is known not only by its delicious food with numerous variety of Caucus and European dishes but also by its high quality service and comfortable atmosphere.
Why choose us
Gift
cards
The average check
for 1 200 - 1 500 rub.
we are located at

On the territory of the cafe "near Serezha" has been operating billiard club "Imperia" for more than 10 years, where you can always enjoy the oldest And the noblest game of billiards. Cozy atmosphere, high quality Maintenance and superior interior will make your game A real pleasure. 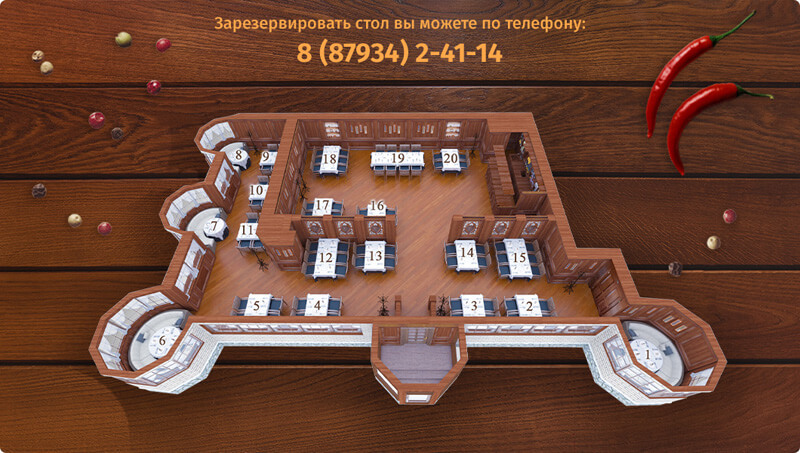